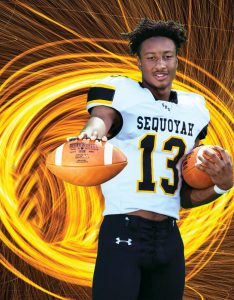 As Sequoyah looks to build off the best season in program history, there may be no player more important to the Chiefs than Myles McGee. A two-way starter who also plays special teams, McGee, however, is more focused on team success. “I think we all have to buy in,” said McGee, a member of the Cherokee Tribune Super Six. “We have to be leaders on the field and play as a team. As long as we do that, I think we’ll be just fine.”

On offense, McGee is Sequoyah’s leading returning receiver. He caught 21 passes for 362 yards as a junior, including four catches for 92 yards and three touchdowns in a 50-49 second-round playoff win over Creekside. Despite his offensive acumen, McGee said he said he actually prefers defense.“I like guarding people and the competition, he said. “It’s hard to say, because I really like doing both. There’s just something about playing corner.”

McGee also averaged 26.3 yards per kickoff return and 11 yards per punt return last year, but his most important contribution this fall could be on defense.With former No. 1 cornerback Emmanuel Jenkins off to Appalachian State, McGee will draw the opponents’ toughest assignments. Last year, McGee finished with 56 tackles and an interception, and he could be even better this season with another year of experience at wide receiver, the position he will primarily be guarding against. ” Playing a lot of receiver, you get to know what receivers are going to do as a corner,” McGee said. “Playing receiver yourself, you see how predictable people can be.”

Besides his time at receiver, McGee has also picked up some skills on the hardcourt. He remains a key player for Sequoyah’s basketball team, which was his primary sport until his sophomore year.Playing the two sports has also dividends on the football field for McGee.“Basketball helps with my footwork a lot, and staying in shape,” he said. “Obviously, the sports are pretty different, but they use a lot of the same skills.”

Since switching his primary focus back to football, McGee has begun racking up the offers. He heads into his final high school season with a dozen offers, including Northern Illinois, Troy, Liberty, Akron, Delaware State, Austin Peay, Campbell, Alabama A&M, Marshall, Coastal Carolina, Chattanooga and Kent State. McGee wants to see how his senior year plays out before making a decision, but when he does decide, the place that feels most like home will be his choice. “I’m looking for a team to make me feel like family,” McGee said. “No matter how far it is, I want to feel like I’m at home.”

No Events This Week

Events are added by athletic staff.
View All Events